Kriz Rogers Top 5 on both Reverbnation and NumberOneMusic charts in Nashville! 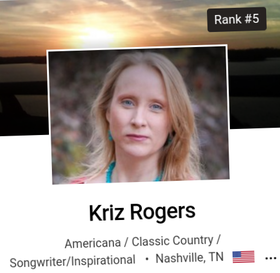 April 5, 2019
Kriz Rogers #1 on NumberOne Music!
Today marks a huge milestone in the career of Kriz Rogers. She landed the number one spot on the Americana chart on Number One Music in Nashville!

"Silent Night" may be a Christmas song that has been recorded by many, but not like in this version.  Kriz is singing it in three different languages: English, her native Swedish, the original German and then English again.  If you think you have heard it before, you have not listened to "Silent Night" the way Kriz Rogers sings it!


To watch the video, go to  www.youtube.com/watch?v=AnKhLyoGlbg


Kriz has also made the cover design.

​July 1, 2018
New Addition to be Added to "Glass & Satin"
Kriz Rogers’ first poetry booklet release “Glass & Satin” is growing.  She is adding a new poem called “Not All” to it, and you can read an excerpt from it here:

“... Not all people
Take advantage
When presented
With opportunity.

Not all people
Suffer in silence
But, pray diligently ... “

“Glass & Satin” is available on Amazon Kindle, buy it here: https://www.amazon.com/Glass-Satin-Kriz-Rogers-ebook/dp/B07B7C79SC
​March 3, 2018
"Glass & Satin" Booklet Released!
The long awaited poetry booklet release is now here! This is the first collection of poems by Kriz Rogers that ever has been released.
For a listen to the title poem the way it was read by Kriz in its first edition, you can go to www.reverbnation.com/krizrogers/song/28565663-glass-and-satin-poem-by-kriz-rogers

"Glass & Satin" is available on Kindle and can be found at www.amazon.com/Glass-Satin-Kriz-Rogers-ebook/dp/B07B7C79SC
​
​January 14, 2018
On Bert Gagnon's "Neon Music Country Legacy Show" featuring Glenn D. Tubb
The always passionate and compassionate DJ Bert Gagnon's radio show "Neon Music Country Legacy" - hosted by Randy Moore - is airing a special featuring legendary songwriter Glenn D. Tubb and his songs. Kriz Rogers has her studio rendition of Tubb's "Memryville" played on that show alongside of other great songs Tubb has written includong "Skip A Rope", Two Story House", "Home Of The Blues" and others. You can check the schedule out at the facebook group for the show right here  www.facebook.com/groups/159873931428437/
December 29, 2017
Kriz Rogers Top Ten on Nashville Chart!

All year long, Kriz has been one of the top charters on Reverbnation's chart for Americana artists in Nashville.  "As the year draws to a close, I am grateful for the support I have received from fans and radio stations throughout 2016, and I am looking forward to keep doing what I love in 2018!" says Kriz.

To visit her RN site, go to www.reverbnation.com/krizrogers
​
​December 28, 2017
Kriz Rogers on Countrykanalen Radio Show
Kriz Rogers is in good company on the radio show My Kind of Country on www.countrykanalen.se ... Air times Wednesday 10pm, Thursday 4am and 12pm CDT, Saturday 10pm and Sunday 1pm CDT and Sunday 10pm, Monday 4am and 12pm CDT.
​
​November 28, 2017
An Upcoming Poetry Booklet
September 12, 2017
Kriz Rogers is working on new material
This summer Kriz started writing new songs for an upcoming album and also working on quotes for a quote book. You may already have seen some of her quotes posted on social media,  More details to come.​

September 12, 2017
Updated RN Musician Site
Kriz Rogers' info on her Reverbnation musician site has been updated to reflect upcoming projects:
www.reverbnation.com/musician/krizrogers
​
April 2, 2017
"A Poem To A Child" On Best of The Year List
Festival For Poetry has acknowledged Kriz Rogers' poem "A Poem To A Child" (listed here festivalforpoetry.com/2017/03/06/part-2-read-the-best-of-family-poetry/) as being the Best of Family Poetry in the recent 18 months.  It is a poem that she wrote for her granddaghter's Christening Ceremony last fall, but as she says "It is a poem that I wrote to reflect the timeless and universal feeling of pure love and joy when a child is born."

Today Kriz Rogers reached number six on the Reverbnation Americana Chart for Nashville.  This is the highest position she's held since she relocated to Nashville in 2013.

To visit her site on RN, go to www.reverbnation.com/krizrogers

​February 28, 2017
​New Poem Posted on Kriz Rogers' RN Site
The Kriz Rogers poem "Seeker" has been posted on her Reverbnation site both as a picture and a reading.
You can check it out here www.reverbnation.com/krizrogers/song/27593875-seeker-poem-reading-by-kriz-rogers
and here www.reverbnation.com/page_object/page_object_photos/artist_347209?photo=28326315
​
​
December 19, 2016
Kriz Rogers Radio Interview airing on CMNI Show

A radio interview with Kriz Rogers will air on four different radio stations just before and during Christmas. The interview is conducted by the well known media personality Christian Lamitschka of Country Music News International.  Dates for the broadcasts are 21+22+23 and 25+26 of December and the radio stations airing the CMNI Show are Countrykanalen, Radiomedusa, Irish Country Radio and Best Country Radio.
​
​
December 9, 2016
Number 7 on the Chart!

Today Kriz Rogers reached the number 8 spot on Reverbnation's Americana Chart for Nashville. This is the highest Kriz has been on the chart for Nashville.
On www.reverbnation.com/krizrogers you can also listen to all of her music, both released and unreleased special songs.
​
​
November 30, 2016
Kriz Rogers Poem Best of the World in November

Los Angeles based poetry website Wildsound Festival Review has picked Kriz Rogers' "A Poem To A Child" as best of the world in November:
wildsoundfestivalreview.com/2016/11/06/november-2016-read-the-best-of-new-poetry-from-around-the-world/

Country Music News International and Kriz Rogers have a sponsorship agreement as of today.  You can read today's country music news from your favorite country stars on their website: countrymusicnewsinternational.blogspot.com/2016/11/country-music-news-international_7.html
​
​
November 5, 2016
"A Poem To a Child" Published on Festival for Poetry Website

Kriz Rogers' poem "A Poem to a Child" was published today on a poetry website called Festival for Poetry:
festivalforpoetry.com/2016/11/05/a-poem-to-a-child-poetry-by-kriz-rogers/
It is Krz's first poem to have been recognized in this way.  Two of her song lyrics have gained recognition and publicity earlier this year in the poetry newsletter "Bard of the Blanco" from Texas.

Christian Lamitshka from Country Music News International Magazine has conducted two interviews with Kriz Rogers.  The latest one was published on their website yesterday along with the initial interview.  The videos are in video format and Kriz answers questions about living in Nashville and USA and her music.

Link to the interviews:
countrymusicnewsinternational.blogspot.de/2016/10/kriz-rogers-interview-by-christian.html

Today was a milestone in Kriz Rogers' career: she reached the number ten spot on the Reverbnation Americana Chart for Nashville.  The Swedish born singer, entertainer and songwriter now living in Nashville is the highest ranked she's ever been since moving to Nashville 3 years ago.  Just before relocating, Kriz held the number one spot on the Reverbnation Country Chart for Chattanooga.  She has previously also been on top of the Swedish Narradiolistan, a national chart voted on by radio listeners, and  reached number fifteen on the European Country Music Association's chart with her signature song "Singing My Blues Away".